In a way, this functions as a follow-up to the previous post about a marketing tactic employed by the Zeitgeist Movement of Colorado.  As in that case, the ideas marketed here lie outside the mainstream.  Unlike the Zeitgeist folks, the organization at work here is extremely well funded and celebrity fronted.

We experienced today in Colorado Springs the same thing many have experienced in cities across the country – a protest of the cruel “entertainment” that is Ringling Brothers and Barnum & Bailey Circus, which happens to be coming to town.

Protesting is PETA, People for the Ethical Treatment of Animals.  As the elephant’s sign reads: Circuses are No Fun for Animals.  The message is directed toward elementary school children and delivered on public property. 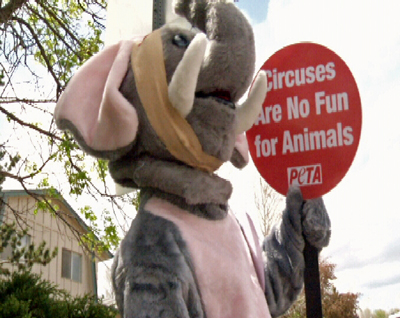 This execution is nicely focused.  They’re timely and topical with the elephant costume, signs, coloring books and more.  Preceding the circus with this message should influence the buying decision.

Commercials to get people to the circus have been running heavily on television here for at least a week; the circus is due in town in a week and a half.  As school’s wrapping up, kids may be talking about the circus.  Parents are probably in active consideration of whether or not to cough up the $100+ it costs to take a family of four to the circus. 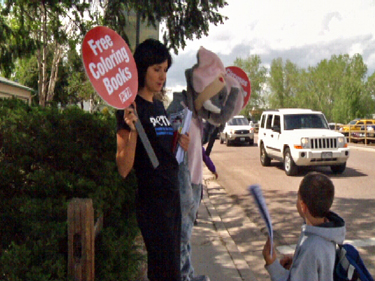 This strikes me as a case in which the discussion is limited to the organization itself, rather than to the specific topic and its related issues.  Alignments are basic:

Meanwhile, just how humane or horrific is the treatment of animals within the circus?  What are the consequences of training of large, wild beasts to perform unnatural tasks for our amusement?  What amount of money or entertainment value justifies any form of mistreatment?  The discussion never gets this deep.

Instead, it’s more basically about PETA – simply a love ’em or hate ’em alignment, plus a faction against their tactics in general.  It’s provocative.  It’s a continuation and refinement of their guerilla tactics.

This is not necessarily a bad outcome for PETA, especially if you subscribe to the “there’s no such thing as bad publicity” philosophy.  Their name passed thousands of lips yesterday.  Because of the timely and topical nature of their message, some share of those people whose attention they got may have “converted” – evaluating the “circus is cruel” message and tending to accept or agree.

In conclusion and a bit from left field:  the difference between zealotry and simply spreading the word is defined by whether or not we agree with the message.

Link: local story at NewsFirst5.com with a couple dozen comments