Super Bowl Blackout Ad By Oreo: Why It’s (Not) New

Most of us watched the 2013 Super Bowl in which the Baltimore Ravens completely blew out the San Francisco 49ers … until the lights went out at the Superdome in New Orleans.  When play resumed, the 49ers scored 17 straight points to make it a competitive game before falling short in the end. The Ravens weren’t the only winners, though.

What stirred up loads of excitement during the blackout was a pic tweeted from Oreo.  As is the case with most live, televised events these days, social media provided additional layer of fun and interest. And a few brands, including Nabisco’s Oreo, were on top of the situation.

Basically, a team of ad agency folks were hunkered and bunkered for the event and got a quick green light from their corporate clients.  So I can move on, here are a few links for background if you want them: 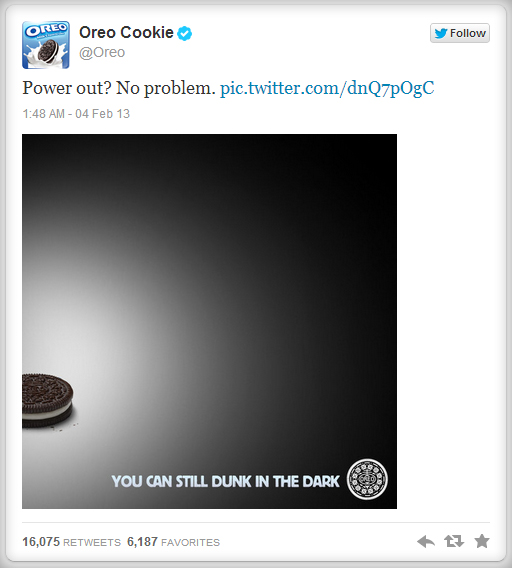 Like … super wow, right!?  The “live” nature of the ad was certainly timely and somewhat relevant.  That a corporate decision-making authority could give it a go so quickly is probably the most interesting thing about it.

Why It’s Not New

Part of my lack of amazement (16,000 retweets!?) is that this type of real-time advertising had been done inside local television stations for more than a decade.

I’ll use WOOD-TV8 in Grand Rapids, Michigan to illustrate because it was the strongest news and weather brand I helped build.  During remarkable events, the news and weather teams would obviously work quickly and aggressively to produce coverage.  Simultaneously, the marketing team would work quickly and aggressively to produce advertising to capture and communicate the essence of the coverage.  We called these “proof of brand” or “proof of performance” spots.

Produced annually or semi-annually, image spots are umbrellas under which the rest of the marketing messages fall.  Their purpose is to establish the brand.  Produced to air a couple days (special reports) or a couple hours (today’s news) before a newscast, topical spots should convey the image while driving viewership of a particular newscast.  Finally, these proof of brand spots served to prove that the news and weather team delivers on the promises made in the image spots.  They’d air for a couple days during and after the event.

The manhunt began in the early to mid afternoon. The promo was produced, edited, and prepped for air before 5pm, as events were still unfolding.  Immediately after the first block of evening news, most of which was dedicated to the event, the promo aired at the top of the first commercial break proving that the news team was on top of the story from the minute it broke.

This promo was put together from coverage the night before and morning of a breakout of severe thunderstorms and tornados and aired during continued coverage of the day’s events.

To get this done, we’d rush the spots to master control and move commercials around to get our ads on the air.  Brands can’t do this nearly so easily.  We had direct access to the broadcast; they work through agencies, sales people, and others to get commercials on or off the air.

Social media changes all this.  All individuals, businesses, and organizations are now their own media companies with easy access to content production and distribution.  Your words, images, and videos can be created and shared more quickly, easily, and inexpensively than ever.

Oreo wasn’t the only brand on top of the Super Bowl situation:

Though you may still use television stations to get your message out, you don’t need them as you once did.

Look again at that Marketing Land headline above.  “Newsjacking” is a term I associate with David Meerman Scott (see here).  The process involves capitalizing on the attention a significant event has earned by turning some of it toward yourself by adding ideas, information, and value in the moment.

I feel the term is misused in that headline, as Scott’s take on it is far more substantive than these relatively shallow and tangentially relevant ad.  Scott positions it more as the new PR than any form of advertising (like Oreo’s tweet).

For newsjacking: think about the opportunity remarkable events represent.  How can you add real value where a large amount of attention is being paid?  Attention is fleeting, so you must be quick.  And, again, you must be relevant.

For real-time advertising: the window is tight for “Oreo” tweets and the like.  More and more brands will jump on the opportunity, reducing its novelty and watering down its benefits.  Because of this, you’ll need increased relevance to make it work; focus on events more specifically related to your brand and to your product or service.