This is how many of my posts get started: I recognize a pattern, see the same thing in two different contexts, feel something developing or seek to answer my own question.  In this case, I started with a pretty big idea that connects two books I just read with one of Terry Heaton‘s mantras (clearly expressed here as “the second ‘bigger boat'”).

The books are “The Idea Writers: Copywriting in a New Media and Marketing Era” by Teressa Iezzi and “The On-Demand Brand: 10 Rules for Digital Marketing Success in an Anytime, Everywhere World” by Rick Mathieson; they’re remarkably similar and overlapping.  Terry‘s a thinker, writer and consultant at the intersection of media, culture and postmodernism.

The moment I knew I had to organize my thoughts on this post’s topic occurred immediately upon picking up the latest Advertising Age, which opens with this headline: “ABC, Syfy and Best Buy? Retailer launches network.”  The sub-head: “Electronics expert turns publisher with multichannel net packed with original content – and it’s seeking ads.”  Per the story, written by Natalie Zmuda, Best Buy’s content will be distributed as an “‘online magazine’ and a huge in-store component with its content and ad messaging ‘broadcast’ on screens across the store.”

So what?  Well, one of Terry’s favorite phrases is “the people formerly known as the advertisers.”  And that’s exactly what we have here.  Advertising relationships are turning upside down.

Best Buy, a significant newspaper advertiser (think: Sunday inserts) and national advertiser across various other media, is now producing and distributing its own content at least in part to sell advertising to other brands and marketers.  Rather than interrupting people gathered around someone else’s content (think: national television commercial in the middle of 30 Rock), they’re creating their own content, distributing it online and in-store and selling impressions to other advertisers. 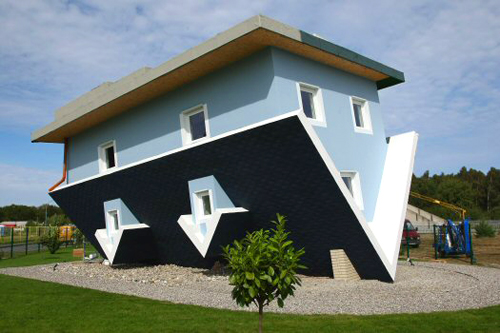 Advertising relationships are turning upside down, much like this house designed by Klaudiusz Golos and Sebastian Mikiciuk.

Another example of a major national advertiser getting into the advertising game – as a seller rather than a buyer – comes from one of the two books involved here.  Mathieson’s “The On-Demand Brand” is built on dozens of examples, as well as on interviews with top-notch agency, creative and marketing types.  In the third chapter, Mathieson describes Johnson & Johnson‘s social networking site, BabyCenter, which reaches “78% of all online women who are pregnant or are mothers of children under twenty four months old in the US” (p 66).

J&J designs, manufactures, distributes and markets loads of products for this demo.  Since they’re successfully enabling and encouraging more than three quarters of all new mothers and mothers-to-be in America to produce and share content within a J&J social networking site, why would they spend a dime on national television or a national magazine?  They needn’t.  Instead, all J&J product promotion within the site is “handled as any ad buy from any advertiser would be – and the site even accepts advertising from other marketers” (p 67).  Upside down.

The third reference point, Iezzi’s book, is a broad overview of the state of affairs as concerns advertising agencies.  It, too, includes many examples – many of which are also used by Mathieson, often to illustrate the same points.  Because her book is more agency- and writer-oriented, though, her allusions to this trend focus more on the threat to agencies seeking to sell creative services than to publishers and broadcasters seeking to sell advertising space.

In her own words: “There’s a lot of content being made, and brands are going to be responsible for making a bigger and bigger share of it” (p 11).  In the words of Spencer Baim, co-founder of Virtue, a new form of agency:  “We believe that every brand must think and act like a media company … You want people to tune into your brand, not to push a message out” (p 114).  In both cases: advertisers are becoming content creators and publishers.  In the latter case: content is an inbound marketing play that trumps commercial interruption.

Increasingly, the advertiser need not interrupt an audience assembled by a traditional media company.  Instead, they’re producing, publishing and selling advertising around content of their own; they’re becoming media companies themselves.  I’d also speculate that their content is better optimized for customer conversion – and it’s closer to the point of purchase.

As you can imagine, this is yet another threat to publishers, broadcasters, cable companies and various other outfits whose entire business model depends on revenue generated from traditional ad sales.

>A separate post could be written about the people formerly known as the audience – based in the thoughts and writings of Clay Shirkey and echoed in The Idea Writers, The On-Demand Brand and Terry Heaton’s blog.  Note: these people are the ones filling J&J’s BabyCenter with relevant content.

>A separate post could be written about content and inbound marketing strategies mastered and taught by HubSpot.

>You can see more images and read more about the upside down house here at Xenophilia, a blog dedicated to “True Strange Stuff.”

>I absolutely love 30 Rock.  I completely abhor Dancing with the Stars.