So, BP gets called out for Photoshopping an image of their Command Center for use on their website.

Here are the before and after images (actually arranged as after and before): 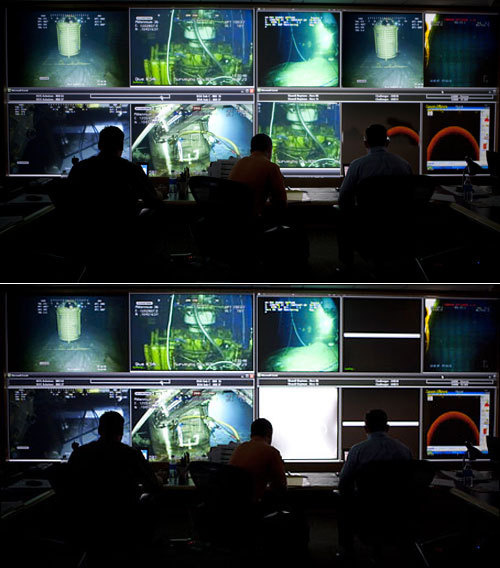 Before and After Photoshop: BP Command Center

I’ll take a minute to stand more toward the middle, but clearly on one side.

Altering an image is directly opposed to fundamental principles of management and public relations.  For the past 5 years, you couldn’t spend 5 minutes with any Harvard Business Review publication without feeling the movement toward transparency and authenticity.

Social media, in particular, has really brought these concepts in practice to the fore.  Fold in some Seth Godin-style storytelling-as-marketing and the picture is even more clear:  every individual and organization has the opportunity to tell the world who they are, what they’re about, where they’re from, why they’re here.  Beyond that, they can always share what they know, when they know it, directly with people who care.

If, however, these efforts are not received as honest and forthright from a good corporate citizen, this may be done for you (witness: BPGlobalPR on Twitter).  Regardless, companies of all sizes have embraced this opportunity and grown as a result.

As small an infraction as filling in a few Command Center monitors with some action shots may seem, it’s not honest.  When your every move is under the most extreme scrutiny you’ll ever enjoy, why doctor the images that are helping tell your story of response and recovery?  Apparently, trucking in workers for a Presidential photo op isn’t enough.

The BP spokesperson’s response to this story wasn’t awful: “Normally, we only use Photoshop for the typical purposes of color correction and cropping.”  Transparency, authenticity and honesty should be employed constantly, not “normally.”  Yes, it’s asking a lot, but truth is ultimately easier and best.

Among many the issues:

The list goes on and the point remains: the PR response to the worst oil spill in U.S. history has been neither excellent nor honest.  The scope of this disaster is unprecedented.  It could have happened to any oil company working off shore.  Some PR blunders and gaffes can be reasonably expected.  Active obfuscation, however, is beyond “blunder.”

Bottom line: I find the Photoshopped image to be a micro-representation of an attitude, philosophy and practice completely opposed to the best path forward: transparency and authenticity.

CNN’s Anderson Cooper has been very aggressive in covering this story.  A couple videos are linked in the body of this post and here’s a link to another specifically about transparency.  Plus, one embed: