Let’s Get Real About The Amazon Prime Air Video

What a fine bit of marketing genius by a company I respect and patronize!

Amazon stole headlines all last weekend, on the eve of Cyber Monday 2013 (biggest online shopping day ever), with a primetime television feature on 60 Minutes and the release of the Amazon Prime Air video.

So what do we have here? We have the suggestion that delivery drone copters will bring Amazon packages to you within 30 minutes.

This suggestion drew predictably mixed reactions – from “Absolute nonsense! It simply can’t be done.” to “OMFG, this is the new sliced bread! Now pick me up off the floor so I can pass out again from the proper blend of befuddlement and elation that every member of the flock of consuming sheeple should be experiencing right now.”

Naturally, the extremes have little relationship with reality, so let’s take a few minutes to get real about the Amazon Prime Air video.

First, I found it quaint and a little humorous that a video about drone delivery service pretends that a human would select, box, and add to the line your product selection. Certainly, humans will continue to be involved, but the goal of efficient order fulfillment is obvious: complete automation. This is related. And so is this.

There’s no question that Amazon, other companies, and even our federal government can overcome most of the “questionables” and hurdles listed above, as well as all those not mentioned here.

Pioneering spirit and consumer demand will help drive a renewed push to same day delivery (a Holy Grail trail of fail). We’ll eventually arrive at solutions to current challenges that will make it more financially and logistically feasible than it is today.

Still … is nothing sacred? How badly do we need stuff delivered to us? And how quickly? So badly that we’d litter our skies with armies of delivery drones to drop packages of things that weigh less than 5 pounds at our doorsteps all day and night? Really!?

Because we can doesn’t mean we should – not that we’ve refused to cross that line before, especially in the face of commercial pressures.

Let’s hope that the Amazon Prime Air video is what it seems to be … a good bit of marketing genius on the eve of the biggest online shopping day in history.

I can think of several valuable and justified uses of drones for deliveries. Most involve either to emergency situations and first responders or to battlefields and troops. None involve Kindles, Nerf guns, or socks. 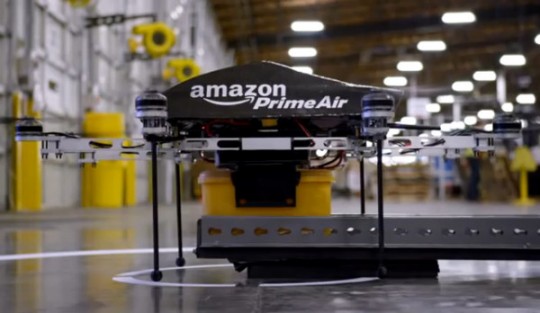