If It’s Noticed, It’s Marketing: Seth Godin on On Being

“(Peter Drucker) reduced the purpose of a business to the logically elegant phrase: to create a customer.  In doing so, he elevated marketing, which is all about creating and connecting with customers, to ‘a central dimension of the entire business.’  Drucker thus set the stage for Regis McKenna’s ‘marketing is everything and everyone is a marketer’ argument.”  (“The Four Pillars of Profit-Driven Marketing” by Moeller, Landry, & Kinni of Booz & Company, p44)

The same weekend I read these words, I listened to a wonderful conversation between Seth Godin and On Being‘s Krista Tippett.  Because her show is about religion, meaning, ethics, and ideas, the conversation brought out Godin’s theses in a slightly different way.

25 minutes in, Godin suggests “Whether or not you choose to be a marketer, you are one.”  It connected immediately, as did many moments throughout the edited hour.

For my own purposes, I transcribed much of what he shared.  Rather than keep this to myself, I opted to share some of them here.  Because listening provides a different experience, I’ve included in point times for each.

This is the episode:

On Faith in His Early Years
2:25 “There wasn’t a lot of religion and there was a lot of faith. And that dichotomy, I think, is really important and it’s informed a lot of the way I’ve lived and what I’ve written about. And by faith I mean: Faith in community. Faith in charity, philanthropy. Faith in innovation and what happens when people make a ruckus or do hard work. Faith in education. Faith in taking initiative.”

On the Subtlety of Evolution
8:14 “When we talk about evolution as a metaphorical thing, where we have memetics and ideas laid on top of this idea of survival of the species and things changing over time, what fascinates me about it is that this bottom up change in the world is everywhere all the time. It’s so much more common than change that gets put down on us by a dictator or by someone who’s putatively in charge. And yet we ignore this bottom up thing when in fact it is the thing we’re most likely to be able to touch and change.”

On Our Post-Industrial Economy
11:00 “The people we choose to be with, the products and services we choose to talk about, are all interesting and unique and human and real – as opposed to industrial and cheap and polished and normal. And so, as individuals, what we have to see is a shift has gone on from the days of Henry Ford, when one creative person had fifty thousand people acting on their wishes … now one person working by themselves can make an idea, a product, a service something in the world. And that shift in leverage means that you’re not going to make it as a ‘worker bee,’ you’re going to make it as someone who is figuring out what to do next and, more important, finding the faith … to walk up to your market, your world, your tribe, your community, and say ‘here, I made this.’”

On the Definition of Art
17:30 “It’s easy to keep track of art by what it’s not. It’s not following a manual, reading a Dummies book, looking at a map. It tends to be people who work with a compass instead, who have an understanding of true north and are willing to solve a problem in an interesting way.”

On Being Constructive
21:15 “So the challenge of our future is to say ‘Are we going to connect and amplify positive tribes that want to make things better for all of us? Or are we going to degrade to warring tribes that are willing to bring other groups down just so they can get ahead?’”

“If It’s Noticed, It’s Marketing”
23:15 “If people think that marketing and advertising are the same thing, they are correct in that it’s not really something that’s worth a lot of your time. But what I’ve been working my whole working life to do is help people redefine marketing as the work an organization or person does when they tell a story that resonates with us. And that marketing isn’t advertising, marketing is the product we make, the service we offer, the life we live. And that no one ever knows the truth about anyone else, but what we notice about other people, what we notice about what organizations do, that’s marketing. If it’s noticed, it’s marketing.”

On Ethical Marketing
24:00 “Do we seek to push to the world an idea that doesn’t hold up to scrutiny, that isn’t true, that isn’t valid, but we can trick people into buying from us? That’s one sort of negative way to approach marketing. Or do we build an organization and build a life and build a career where if someone knew the truth they’d want to work with us? And that’s marketing, too. And so the question as you go forward is will you choose this ethical form of marketing that doesn’t involve yelling at people, networking your way to the top, spamming people, and lying, but instead involves weaving a story and weaving a tribe and weaving a network that means something – doing work that matters. Because now, everyone has their own TV network, everyone has their own radio station, everyone has their own printing press. So what are you going to put on it? What are you going to put out to the world?”

On Materialism, Abundance, and Connection
28:50 “All I do for a living is notice things. And there’s one view of the world called the Walmart view that says that what all people want is as much stuff as possible for as cheap a price as possible. And if you look at the world through that lens – and there are plenty of people who do – you can come up with a strategy to achieve that. And that’s Black Friday sales and that’s self-storage units and that’s somebody who’s happy to push you to buy something you don’t need because the object of the game is for them to have more stuff. And that’s a world based on scarcity – I don’t have enough stuff, how do I get more stuff?

On the Genuine
34:30 “How few people can I influence and still be able to do this tomorrow? Because if we can influence just enough people to keep getting the privilege to do it, then tomorrow there will be even more people, because we’re doing something genuine that connects as opposed to doing something fake that’s entertainment.”

On the Story of Icarus
44:00 “For me, the most important message that I’ve come to after thinking about this for so many years is we are flying too low. We built this universe, this technology, these connections, this society, and all we can do with it is make jokes? All we can do with it is put on stupid entertainments? I’m not buying it.

“So I go back to all the things my late mom taught me.  We can have more faith in community, in charity, in innovation, in dignity, in education.”

On Parenting Free Range Children
47:30 “As parents, we’re often pushed to make this choice. And the choice is keep your kids out of the connection world and isolate them and make sure they’re ‘safe’ or put your kids into the world and all hell will break loose. Those are the things they talk about at the PTA meeting.

“And I don’t think that’s the choice. I think the choice is everyone is in the world now. Everyone is connected. You cannot keep your 12 year old from hearing profanity. Get over it. But, given that they’re in the world, what trail are they going to leave? What mark are they leaving? Are they doing it just to get into college? Or are they doing it because they understand that their role as a contributor to society starts now when they’re 10, not when they’re 24. And that the trail they leave behind starts the minute someone snaps their picture.

“And if we can teach children that there isn’t this bright line between on duty and off duty, but that life is life and you ought to live it like people are looking at you – because they are – then, we trust them and we trust them to be bigger than they could be because they choose to be bigger. And it’s that teaching, I think, that is so difficult as a parent. What you really want to do is protect them and lock them up until it’s time, but the bravest thing to do is to have these free range kids who are exploring the edges of their universe but doing it in a way they’re proud of, not hiding from.”

There are so many outstanding moments in this listen.  And I can’t say enough good things about On Being; I’ve heard hours of it and always received a significant return on my time and attention. 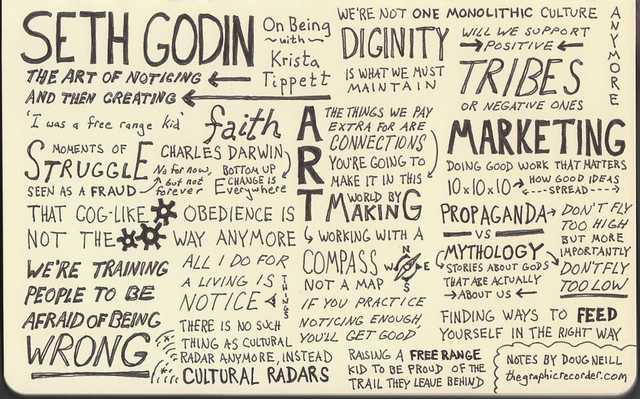 A huge thanks to On Being with Krista Tippett for providing continually great conversations with inspired and inspiring people.