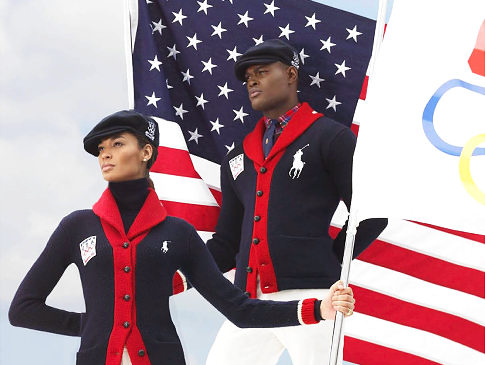 The Wall Street Journal was told that a 10% royalty was to be paid to the United States Olympic Committee on sale of all Olympic-themed Ralph Lauren merchandise; I would expect that there are further considerations to be given the USOC.  Beyond a few facts, then, I know little about the financial details or general depth of their relationship.  My knowledge of the situation is limited to how it plays out on television and online to a passive observer.

I simply wanted to take a moment to say:  this partnership between the two really seems to work.

Both brands are classic, aspirational and all-American.  It’s refreshing and satisfying to see a marketing and branding partnership that fits so naturally.

Though I personally favor outdoor lifestyle brands like Patagonia, Columbia, or REI and though I find the polo horsemen obscenely oversized in their Olympic incarnation, I can’t see our Olympians on parade in anyone else’s gear.

The Opening and Closing Ceremonies – as well as all the other Olympics-related photo opps – are strictly fashion events and no other brand fits.  Try to name one that would.  Hilfiger?  Izod?  JCrew?  Banana Republic?  All laughable.

Here’s the Ralph Lauren 2010 Olympic Collection – all available for purchase (be warned: prices marked up with a serious Olympic premium).