Spring snow melt is producing seasonal streams down the high east slopes of Pikes Peak.  The alpine tundra is greening and blooming.  With perfect weather and good, unexpected company, my second round trip hike of Pikes Peak by Barr Trail was the best summit experience yet. 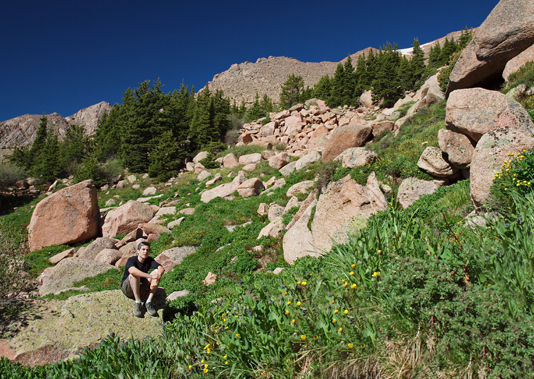 I pulled into the parking lot off Ruxton over the Hydro Plant immediately behind a guy in a Toyota Tundra.  As we were both getting our stuff together, he asked if I was heading to the summit and if I’d ever done so.  I answered in the affirmative to both questions, prompting his follow-up: can we hike up together.  He wasn’t so keen on my idea of starting the hike on the Incline, but he decided it’d provide a good challenge and cool story.

(Aside: committing to spend the entire morning with a complete stranger may seem striking, but it’s not.  My rationale: we’re both in the parking lot at the bottom of Barr Trail at 4:45am – we’ve definitely got enough in common to carry 5 or 6 hours of conversation!)

Just like that, Jay and I were headed up the mountain.

We’d probably have made it to Barr Camp a half hour or 45 minutes faster, but Jay tweaked one of his calves on the Incline and it kept seizing up on him.  He worked through it nicely and we kept a nice pace the rest of the way.

I love the mountain, the people and the culture of the place, but where Pikes Peak by Barr Trail really gets great is at the Ghost Forest a bit above Barr Camp.  Next is the A Frame Timberline Shelter, followed by a climb up to a broad, bouldered bench.  For its beautiful alpine tundra and wild granite figures, my favorite part of the hike is around the 3-miles-out mark (progress is all very well marked).  Once the trail switches on a long, southerly crossing of the east face of the mountain, you’re treated to a couple nice looks into the 1,500-feet-deep Cirque.  A few mouths full of diesel exhaust from the Cog train let you know you’re close to the destination.  The “16 Golden Stairs” are the final switchbacks before the summit, where a zoo awaits. 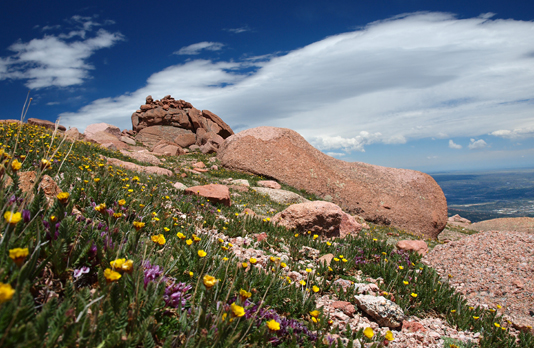 Greening, blooming tundra and granite figures make this my favorite part of Barr Trail, two or three miles shy of the summit.

Jay wasn’t hiking round trip, as he had a 5pm commitment far across town.  I hung out at the summit house while Jay lined up a ride down with a family from Kansas City.  We thanked each other for what was certainly a mutually positive experience.

The hike down was marked with a nice Father’s Day phone call with my wife, son and father, all of whom are in Michigan at the moment.  Passing through Barr Camp, there was a little to-do about a huge black bear that’s been hanging around this spring.  I also took a little more time to shoot some photos than I did on the way up (example: the stands of Columbine just above the Fremont Experimental Forest were in the shadows on ascent, but lit on the way down).

It was a fantastic 12-hour day throughout which I became more fond and more familiar with my “home court” hike.  Pikes Peak and Barr Trail don’t get much love from the serious hiking and climbing community (my impression), so I’ll share it in abundance.  I aspire to return annually, maybe at different times of the season.

I really felt great all day – never weak, tired or sore.  That said, I woke up pretty tight on Monday morning!

The summit is not the best part of Pikes Peak.  The views are nice, but not nearly as fine as those on many, many other mountain tops or as those from elsewhere on the mountain.

By starting the hike on the Incline, you knock off a mile or mile and a half in distance and put 2,000 feet of the 7,500 foot climb behind you.

Albums to which I pop/rocked down the mountain:

My Flickr photo set of the marathon round trip summit hike of Pikes Peak by Barr Trail is here.  Click “Slideshow” to see them in sequence.

The 2009 Pikes Peak Atlas by Ormes and Houdek is here.

I’m obviously extremely fond of Pikes Peak.  If you have any questions about the mountain or the hike, please Connect with me about it.