On the eve of one of what could be the most significant free agency period in the history of the National Basketball Association, I’d like to share a few observable upsides.

The downsides are easy.  Free agency connotes “hired gun,” disloyal mercenary and money-grubbing whore.  OK, that last one was over the top, but the point remains: free agency can make players seem as though they’re simply chasing cash and/or the opportunity to win a championship.

Disfavor toward free agency also comes from Association purists, who like to see the same franchise send the same squad to the court year after year.  Larry Bird was a Boston Celtic.  Isaiah Thomas was a Detroit Piston.  John Stockton and Karl Malone were the Utah Jazz franchise … until the Mailman chased a championship by bandwagoning with a Los Angeles Lakers team that was surprisingly felled – no, crushed – by the Pistons in the 2004 NBA Finals.

I can’t get into restricted and unrestricted free agency, salary caps, salary matching or any of the other mind-numbing nuances of NBA roster-building.  I’ll simply add, as open season on the NBA class of 2003 begins, that free agency is not all bad. 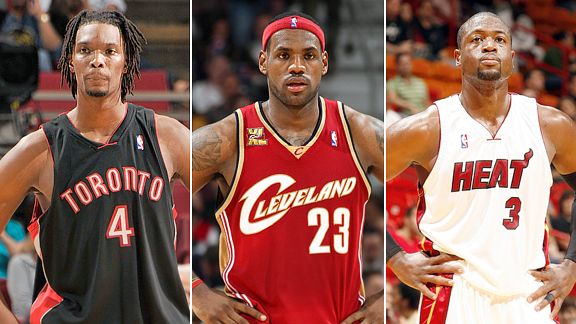 1. Renders jerseys obsolete and requires the purchase of new jerseys.  I would never purchase, nor wear, an NBA jersey – never going to happen.  That said, hundreds of thousands of people around the world would – and do.  Players changing teams means more jersey sales.  Result: Goodwills and garage sales become littered with instantly “retro” gear – yours on the cheap!  Allen Iverson Nuggest jersey, anyone!?

2. Renders video games obsolete and requires the purchase of new editions.  No one wants to create new rookie players, much less shuffle rosters through trading, releasing or signing players.  It’s far easier just to buy this year’s release – especially if there have been substantial changes across the Association.  Don’t care about current rosters?  Just want to jack up some 3s and throw down some dunks?  BANG!  NBA Live 2007 will set you back just $0.59 on eBay.

3. Takes fans one step deeper into the process.  Video games have done this to some degree by providing the opportunity to coach teams and build franchises.  The combination of enhanced mainstream and niche media attention and roster dynamism have given fans interested in the NBA a deeper look into the relationships and negotiations between owners, GMs, coaches, agents and players.  More awareness and transparency generally results in deeper loyalty.

4. Enhances the soap opera element.  Let’s face it – professional sports are, in part, simply soap operas for men.  Deny it if you wish, but you’re accepting blindness in doing so.  More movement means more story lines means more drama.  I know I’m curious where everyone will land – and how.  I’m also curious how the new chemistry wherever changes take place will develop.  I’m also curious about the balance of power – where and how it’ll shift.  I also watch reality television – what can I say?

5. Adds more year-round interest to the game.  The NBA season now runs from around Halloween through mid-June, leaving only four months to fill with inter-season interest.  The draft helps, as does this free agency period.  New rosters take shape and next thing you know, they’re in camp for the new season.

6. Gives new hope to desperate fans.  The promising combination of the draft and free agency gives even the most dejected fan Chicago Cubs-like optimism for next season.  I’m all for that.

So as the league’s superstars prepare to entertain whatever offers and scenarios their agents can line up, I refuse to hearken back to the day when Zeke and Stockton were unwittingly competing for “world’s shortest shorts.”  Instead, I look forward to a new-look Association this fall.

Seriously, check out this list of free agents ranked (fanhouse.com)

Or, check out this list of free agents by team (espn.com)