Tomorrow, I’ll day-hike Barr Trail to the summit of Pikes Peak and back down for the second time.  This hike, however, already feels different.

My first ascent was undertaken in gleeful ignorance just three weeks after moving to Colorado Springs.

It wasn’t until I hiked up alongside of JJ, a 20-something from Denver who’s in the Colorado Mountain Club, about 5 miles up that I really understood the accomplishment of day-hiking it.  The young man filled me in. 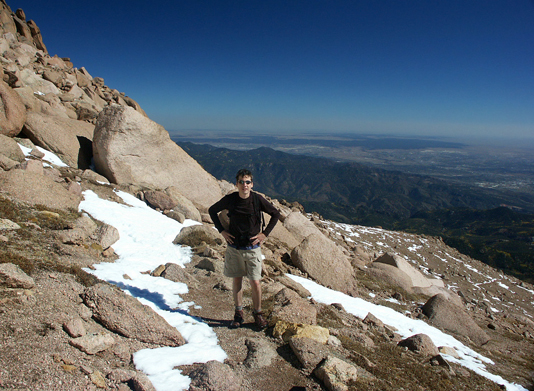 Pikes Peak by Barr Trail is marathon-length, the longest approach of any of Colorado’s famed 14ers (+14,000 peaks).  It also has the greatest elevation gain of any approach; from the trailhead in Manitou Springs to the summit, you climb approximately 7,500 vertical feet.

Among more than 50 qualifying Colorado peaks, Pikes ranks 30th at 14,110ft above sea level.  So, it’s not even close to being the highest.

It’s also not the most technical.  In fact, it’s probably the least technical.  Barr Trail is a Class 1 walk-up, about as simple a summit hike as you’ll find.

It’s also insanely civilized.  To call Barr Trail heavily used is a gross understatement, even by 14er standards.  There’s Barr Camp halfway up, where many hikers spend the night, purchase t-shirts, eat a pancake breakfast or pick up a bottled drink.  The summit itself is a tourist’s delight, designed to satisfy all those who drive up the Pikes Peak Highway or ride up the Pikes Peak Cog Railway.  In addition to a huge gift shop, replete with the requisite “Got Oxygen” t-shirts, summit house offers a snack bar and fresh donut stand.  Note: in addition to hiking it, I’ve been up by (rental) car and by cog railway.

So, what’s the difference between my initial go at it and what I’m preparing for tomorrow?  I don’t keep a list, but I’d guess I’ve climbed a couple dozen mountains since my day-hike of Pikes Peak.  So what’s the big deal?

I’ll call it the mental aspect of endurance.  It’s a little more in my head now.  I’m thinking too much about it.  It’s shaping up as more of a mental challenge than a physical one.

It’s going to be a long day – probably 12 or 13 hours of hiking.  I’m going to start before sunrise.  I’m certain to have blisters by the end of the day (even though I plan to switch between shoes and boots near treeline).

I’m not going up the much shorter Crags route on the west side of the mountain.  I’m not splitting the hike in half with by staying overnight at Barr Camp.  I’m not hiking up, then catching a ride back down in a car or on the train.

Instead, I’m heading up as fast as I can, buying a Gatorade in the summit house, seeing how full the parking lot is, then hauling all the way back down and out (the hike down’s different, but it isn’t easy).  I’m already wondering how tired and sore I might be as I head in to work on Monday morning.

To feel a little more prepared, I put on my boots and a full pack and did The Incline this morning.  And to think … last time, I simply decided on a Thursday afternoon that Saturday’s weather looked good, so I should head up that mountain in my back yard.

All kinds of Pikes Peak photos from my Flickr photo stream are here.