Personal Branding: What You Say Can Be Used Against You

Respect must be earned constantly.  Your personal brand is alive.  What you say can be used against you, especially if you live in the court of public opinion.

For years, I’d respected perennial NBA All-Star Kevin Garnett for his hard work, high achievement and defensive prowess.  I liked the Pierce/Garnett/Allen trio they assembled in Boston.  I preferred they win over Los Angeles in the 2008 NBA Finals.

I lost most of my respect for Kevin Garnett after his failed attempt to shout his sponsor’s slogan immediately after winning the 2008 NBA Championship as a Boston Celtic.  I found it shameless to pass off the commercial as authentic.  You can see that video here.

“I’m going to Disney World!” absolutely defined an era of championship-winning and became a pop culture reference, something about which Adidas’ “impossible is nothing” could never dream.  Apparently, having KG as your front man gurantees its dormancy. 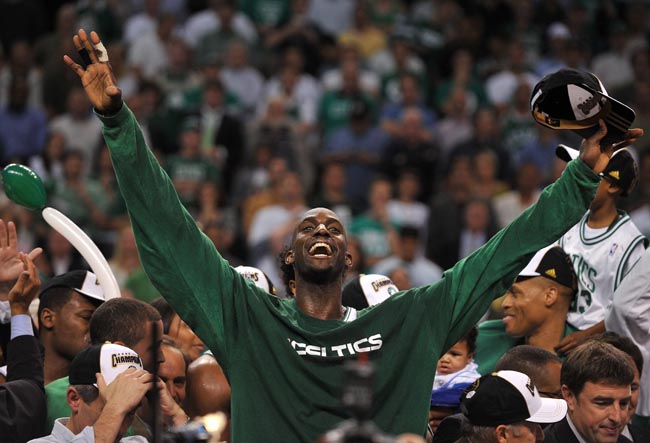 Garnett tries, but fails, to shout "impossible is nothing!" (Gabriel Bouys/AFP/Getty Images)

Today: reports that Garnett called Detroit Pistons forward Charlie Villanueva a “cancer patient” during a game.  By tweeting about it after the game, Villanueva is said to have violated an unwritten players’ code against sharing such on-court antics off the court.  Read the ESPN story here.  Read the Bleacher Report story here.

I’m no cheerleader for political correctness.  Garnett has every right to say whatever he wants whenever he ways, no matter how insensitive, childish or reckless it may be.  Even with a parent who’s a cancer survivor, I’m not offended by the remark.

What I do find offensive: “You are cancerous to your team and our league.”  Garnett claims this is what he actually said – in the middle of the game, in the “heat of the battle,” as a piece of trash talk.  Right.  I’m sure that line was preceded by “Excuse me, Charlie.  In a moment, I’ll commence talking trash, as they say, to get inside your head and take you out of your game.”  Given the chance to display some integrity, to own his words, Garnett passed.

Goes without saying: millions of people who are, in fact, cancer patients die every year, leaving tens of millions of family members, friends, colleagues and fellow cancer patients behind.  All of them are among your current, prospective and former brand advocates and adherents.

Worth remembering: your personal brand exists in real time across many media.  Video’s being shot.  “Codes” and other institutions are being violated (if not demolished).  Tweets are being retweeted.  Be prepared to own the things you do and say.

The bottom line: ultimately, production is all that counts to most NBA fans.  If Garnett continues to pour in 20 and grab 10 most nights, all will be forgiven.  20/10’s not enough to earn my respect, though, and I’m sure I’m not alone.