Breaking Down “Live It Up” – Colorado Springs New Branding Campaign

In Colorado Springs, a place I’ve called home for more than 5 years now, community leaders recently gathered and consultants were hired to create a branding campaign for the city.  The targets: “residents, tourists, and the business community.”

I love a good internal branding effort – one that gathers stakeholders, is facilitated by an outside party, and results in self-discovered essence and difference.  I didn’t balk at the $110,000 price tag, as many have.  The fruit:

The key deliverables were unveiled on Tuesday afternoon – a logo, slogan, and video.  The language from the head of the CVB at the press conference was a bit stiff, including the idea that it had to “differentiate us from the competition.”  Ready?  Live It Up, Colorado Springs!

Beyond the self-congratulatory whooping of those directly involved, reception of the logo, slogan, and video was not especially favorable. 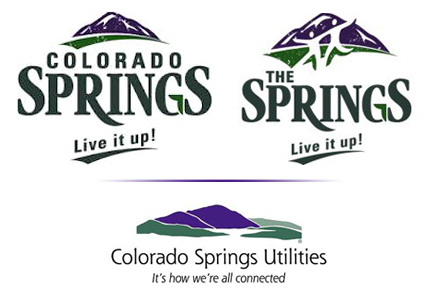 Bad idea (above): two logos instead of one. Inspiration (below): better than Battle Creek Utilities.

Again, I’m fine with brand process and the resulting essence, truth, and character, but the creative execution needs help.

For the slogan and logo, a visual reference to elevation (either 6,035ft for the city or 14,115ft for Pikes Peak) would help draw a necessary connection.  Abandoning a phrase that feels extremely dated (who’s “living it up” in 2011?) by abandoning a slogan or tagline completely would have been perfectly acceptable to me.  The mountain should have a much stronger resemblance to the iconic east face of Pikes Peak.

On the upside, the green and purple work for me.  The colors fit and are one of the most unique features of the entire effort.  They roughed up the peak a little, which implies rugged.  The font choice is fine; it’s not especially common and has a little style to it.

As noted in the caption above, I abhor the idea of two logos; a logo is a logo is a logo.  It can change and evolve over time, but two logos in use simultaneously is a basic branding no-no.  It feels especially disjointed when both appear at the end of the video.

In the video, I see several problems, including:

To that last bullet point: a basic fault of the structure is that there’s too much saying and not enough showing and proving.  The worst case is the poor kid forced to call his city “radical.”  Though they used to be sufficient, boastful, superlative claims (awesome! exceptional! vibrant!) without clear support are unconvincing (especially when uncomfortably delivered).  Despite several good shots and fantastic photos, this too-much-saying problem could not be overcome in the nearly 4 minute presentation.

There are many other subjective issues I have with it, but those are basics.

Stepping back, though, there’s a bigger issue.  This video serves no constituency in particular.  The desired takeaway is completely unclear.  It seems obvious to me that if you have 3 different targets – locals, tourists, and businesses – that you need 3 different videos.  Why?  Because they each have unique sets of needs!  One video will not serve them all and, as a result, will serve no one.

That’s just a quick, one-pass effort at outlining videos to address the three segments’ specific needs and interests.  Obviously, a ton of  video would be used in all 3; it’s not a significant, multiplied effort.

Colorado Springs has lots to love.  It’s a beautiful place with a great climate, rich history, and good people.  I appreciate the effort and agree with the foundational brand concepts generated.

A truly collaborative effort would have been more authentic and better received.  Take the brand concepts, share them with locals, then turn them loose on logos, slogans, and videos.

Of course, a process that open is just as scary as negative Facebook comments.