It’s the sub-headline and positioning of a recent “Billionaire University” story in the Forbes 30 Under 30 issue: “Some of the Forbes 400 have Ph.D.s; far more never finished college.”

The Concept: College is unnecessary if you want to get rich.  The best school is the school of hard knocks.  The lecture hall pales in value to life experience.  Learning means doing.

The concept is true.  College is not absolutely necessary.  High school grads and college dropouts do populate the Forbes 400 (the 400 richest Americans).

While I concede that it’s true, it’s also misleading, as is the positioning of the Billionaire University piece (comparison of college dropouts to a narrow segment of advanced degree holders).

The Chart: Using data published in the Forbes story and adding a couple observations, I produced this chart … 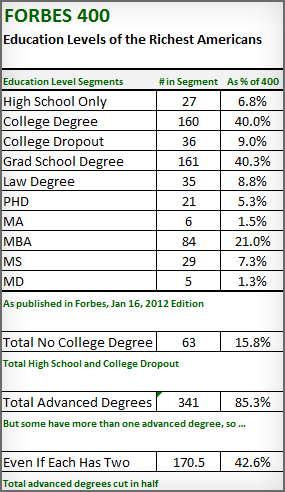 I’ve invested significant time and money in these programs.  I’ve learned a ton.  I’ve met many interesting people and built some valuable relationships.

Still, I often find myself in a defensive position about this investment.

In addition, I’m skeptical and cynical by nature, so I quickly attached to the idea that the real numbers belie the popular concept.

The Forbes 400 does not represent the U.S. population at large.  The numbers, percentages, and ratios are likely very different at different levels of wealth.

I think the misleading positioning of Billionaire University is used to advance a romantic notion of the American entrepreneur.  I do like that notion; I recognize its truth and cultural value.  My point in this post is that it’s overstated.

From the perspective of the college-is-worthless/life-experience-is-the-best-teacher concept, Josh Kaufman produces an excellent content stream called The Personal MBA.  I highly recommend it.

There’s a significant difference between college is unnecessary and college is worthless.

I don’t have any specific reason to complete my MBA.  It’s just fun, interesting, challenging, and productive.

I recognize that all my graduate school costs are sunk costs at this point.

I also recognize the opportunity costs of the time and money invested in graduate school.

Wealth is nice, but it has absolutely nothing to do with being a good human.