ESPN and the College Football Playoff have a decade left to go with the new status quo, despite an awful, initial result.

A key difference: The games were played on New Year’s Eve this year, rather than New Year’s Day.

Here’s a rundown on the situation.

Last year saw the start of a 4-team College Football Playoff. The first- and fourth-ranked teams face off. The second- and third-ranked teams play. Then the winners of the two games play for the National Championship a week or so later.

This year saw the start of those semifinal games being played on New Year’s Eve, rather than New Year’s Day.

And the results aren’t pretty.

Didn’t They See This Coming?

As always, there are several factors at play here. There’s no sole reason for the dramatic drop in ratings and viewers.

Last year’s late game wasn’t the 38-0 blowout this year’s was as underdog Ohio State won by a touchdown in a closely contested game.

And last year’s semifinal games were two of the highest rated cable television events ever.

The effect of increased streaming of live content like these bowl games isn’t fully captured in television ratings.

Still … couldn’t we all see this coming?

ESPN’s also battling contracts with the Rose Bowl and Sugar Bowl, conflicts with NFL playoff expansion, and competition with New Year’s Eve countdown shows on ABC, as well as other networks. 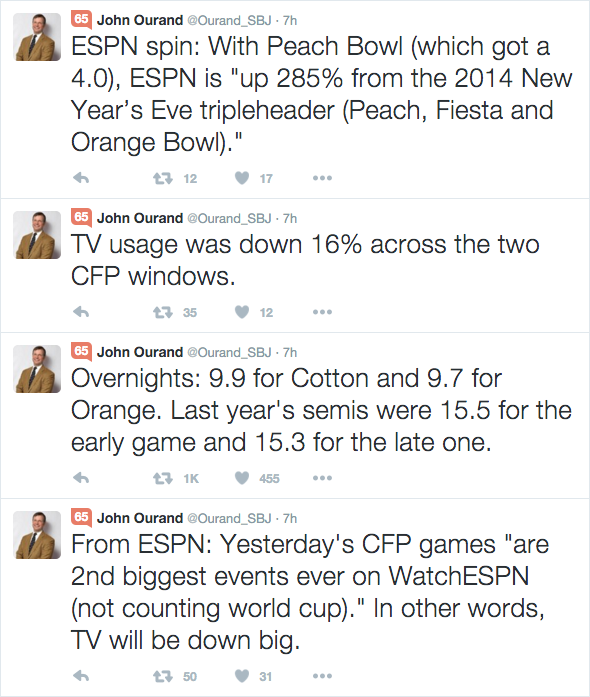 The ESPN and the College Football Playoff are also fighting cultural history.

New Year’s Day has been synonymous with college football bowl games for decades. For generations.

New Year’s Eve? Not so much.

Be honest: Were you sneaking peeks at screens large and small while honoring commitments to spouses, significant others, family members, and friends? And that’s just during the late game!

Were you sneaking looks at screens large and small during the first half of the early game because you were at work?

Those in the know expect you were. And they expect to forge a new tradition and “reinvent New Year’s Eve”.

“This will change habits. There’s no doubt that for true fans this will change behavior.” – Artie Bulgrin, ESPN’s SVP for Global Research and Analytics in the New York Times

UPDATE (Jan 8, 2016): ESPN’s definitely caught in the middle on this one; the $20,000,000 give back is theirs to give back. Meanwhile CFP’s executive director says things like this: “We don’t make decisions based on television numbers. I don’t have a TV number that influences my measurable for success.” Source

Is this hubris or plausibility? Will a new tradition be forged?

The NFL has Thanksgiving. The NBA’s building up on Christmas.

Will the College Football Playoff claim New Year’s Eve? Only time will tell, but the early test delivered a bad result.

If advertisers are willing to cover the $7.3 billion investment with sufficient bets on :30 spots, it’ll all be fine.

Because of ESPN’s contracts with the Rose Bowl and Sugar Bowl, 3 of the next 10 College Football Playoff semifinals will be held on New Year’s Day.

We’ll have years off-and-on with New Year’s Eve and New Year’s Day. Over the next decade, the test will have a definitive result: hubris or genius.

A quick thanks to friend and television professional Nick Matesi, General Manager of Gray Television‘s KKTV in Colorado Springs, Colorado.

His comment on one of my Facebook posts yesterday about the ratings drop spurred me to write this post and use the hubris/genius question by using the word … “hubris.”

Again, time will tell, but I agree with Nick.