A New Low at High Speed

In case you were not yet aware: the US lags other developed nations in broadband and wireless infrastructure and services.  Our federal government is currently working on a National Broadband Plan to try to catch up – or at least to get into the game.

Sascha Meinrath, director of the New America Foundation’s Open Technology Initiative, criticizes the plan.  Meinrath says it’s “like entering a race and saying: ‘Let’s go for last place.’”  His organization is cited as the source of this info:  a 100-megabit broadband connection costs as little $16 per month in Sweden and $24 per month in Korea.  Meanwhile, service only half as fast costs $145 per month in the U.S.

Here’s a not-so-pretty picture from CNet News and the Communications Workers of America: 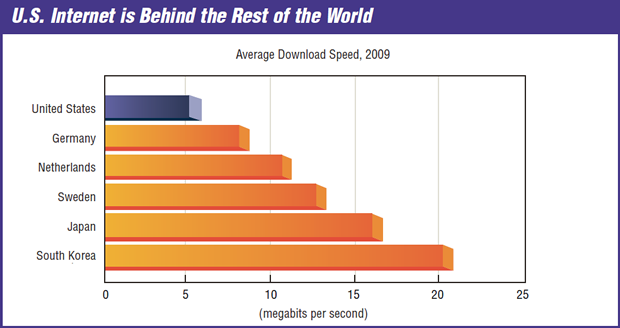 The US trails other nations in internet speeds

So, South Korea is among the leaders.  I’ve already taken an extremely indirect route to my point, so here’s a quick sampling of their many achievements in communication technology:

This leadership also comes with problems.  As illustrated in Frontline’s Digital Nation series, internet addiction among Korean teens and 20-somethings is a serious problem.  Kin to a young person falling off the face of the earth for a few days on a heroin bender, they disappear for great lengths into video games and virtual worlds by way of high-speed internet cafes (PC Bangs). 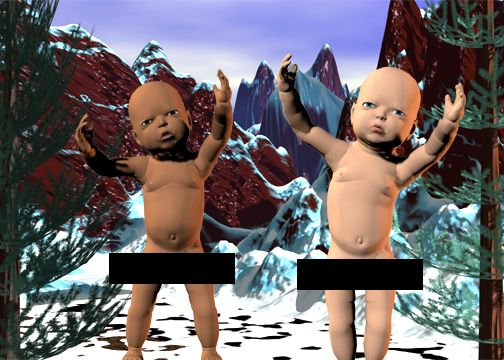 In Virtual Reality, No Child is Left Behind - by Greg Garvey

Here it is: a South Korean couple let their 3-month-old girl die of starvation, neglecting her in favor of raising a virtual child in a nearby internet cafe.  The real infant was fed once a day between “marathon sessions” in a “fantasy role-playing game.”  According to a police officer, the couple “seemed to have lost their will to live a normal life because they didn’t have jobs and gave birth to a premature baby.  They indulged themselves in the online game of raising a virtual character so as to escape from reality, which led to the death of their real baby.”

Isolated incident or microcosmic glance into the fallout of racing into all things high-speed, digital and virtual?  I think it’s more the former, but with overtones of the latter.  Regardless, this is a new low at high speed.

I’ve blown over a huge topic area on this one.  A few personal notes:

Hopefully, these outrageous stories will give us pause before our perpetual hurtling into tomorrow at high-speed continues.

Note: “In Virtual Reality No Child is Left Behind” (image above) was created by artist Greg Garvey, whose digital work can be seen here.