Social Whoring – What to Make of It?

I feel compelled to have at least one image in every post.  Typically it falls in the most content-appropriate spot about a third or half way through the post.  Today, we’re starting right at the top.  Check this out: 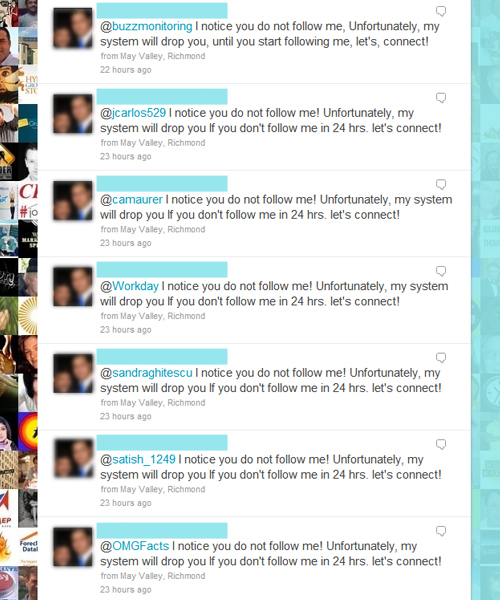 Who does this? Why?

I’m moderately active on Twitter.  I follow about a hundred people and organizations.  I’m followed by about a hundred others.  I (mis)use it primarily for social bookmarking – sharing things I think are interesting and trying to position them with a personal take – all within 140 characters.

Now and then, I get new follows from people with whom I’m unfamiliar.  This is a great thing.  Presumably, they’ve stumbled across something I’ve put online and decided that my perspective could be of interest or value to them.

My first step: check their Twitter feeds and profiles.  Are they actually human?  Who are they?  What are they about?  How do they use Twitter?  Are they posting things in which I’d find interest or value?

I recently checked the Twitter feed and profile of an unknown follower and came across the phenomenon screen captured and embedded above: an automated system to follow new people, then threaten to un-follow them if they don’t follow back within 24 hours.  Nothing like guilt or coercion – complete with 24 hour detonation clock – to create a community of like-minded followers.  Come on, let’s connect … or I’ll terminate you!

In short: Who does this?  Why?

Related: I was terminated.

I call it whoring because it involves attempted engagement with someone you don’t know, with whom you have nothing in common and with whom you don’t intend to relate authentically.  Instead, you’re relegated to a notch on the bed post – the more, the better.  Whether or not there’s any real engagement is irrelevant.  The quality of engagement – or lack thereof – isn’t even on the radar.

The name is a bit inflammatory by design.  I hope to provoke thought and discussion on these tactics.

Social whoring is perfectly fine.  It probably works for many of its subscribers and practitioners.  These tactics must work or else social whores wouldn’t continue to employ and evolve them.

Based on my visceral response when I encounter it, though, it doesn’t seem to be for me.

I received a friend request from the editorial page editor of our local newspaper.  I checked out this person’s wall, which is loaded with editorials published in the newspaper and online, plus some light conversation.  I thought – OK, I’ll engage in discussions about what’s happening around here.   Accept!

A week later, some friends are over for dinner.  One of them asks – hey, are you friends with (name of editorial page editor of our local newspaper) on Facebook?  Why, yes … I am.

On principle alone, I had to un-friend the editorial page editor of our local newspaper, who seems like a nice enough person – smart and interesting, too.  This person’s approach, though, is a bit heavy on the social whoring.

For better or worse, friend-requesting people this person doesn’t know, then all of the new friends’ friends seems to be working.  The editorial page editor of our local newspaper has 2,500 friends.

Last example in this post (though examples abound – look around):

Are you a fan of Evan Bailyn on Facebook?  More than 70,000 people are.  In this October 2010 article at AllFacebook.com, he describes how he gathered 57,000 fans in one year.  The value returned to you for your “like” is the regular appearance in your news feed of generically positive status updates like “Surround yourself with people who believe in you” and “Take it one day at a time.”

A crucial step in amassing this following, beyond the consciously formulaic content strategy, was “contacting popular people on Facebook and asking them if I could get them to suggest my page in exchange for services, shout-outs, or, as a last resort – cold, hard cash.”

This case is the most confounding to me.  That last statement, written by Bailyn, is obviously whoring.  Hey – you have a big following.  I’ll give you “services” or even “cold, hard cash” in exchange for suggesting me (who you don’t know) to all your fans and friends (who don’t know me).

The confounding part is that he’s an extremely intelligent and positive person.  He probably has designs on a positive use of this mass following.  He’s founded successful start-ups and websites, written books and started a foundation to help children ages 7-17 through creativity.  His welcome page for non-fans on Facebook is a smartly-designed, stylish, fun and storytelling piece.  I like what he’s doing.

What to Make of It?

The title of the post has now come around.

In the Bailyn case, do the ends justify the means?  When is “whoring” actually whoring?  Have you witnessed any grossly whorrific tactics?  When are more people better than the right people?  Is the judgment even fair?

Your thoughts are invited in the comment section.  Thanks!

Reminded Of It In People

Music has once again restored my faith in humanity, which happens on occasion.  The right recording at the right place at the right time can provide transcendence from the moment, from the ills, from the weights.

These are things that I found a couple afternoons back in an album crafted by a collective of more than a dozen humans.

They’re also things I enjoy and appreciate in my life, in my family and in my friends.

Rightfully, the title of the album is “You Forgot It In People.”

“You Forgot It In People” is a 2002 album from Canadian indie pop/rock outfit Broken Social Scene on the Arts and Crafts label.

I’m grateful for humans who have the courage to pursue artistic and creative careers.  They’re vital to our transcendent moments.