Organizational Behavior: The Purist and The Pragmatist

“Both are necessary. Both are important.”

John Mackey, CEO and co-founder of Whole Foods Market, gave me specific language for a common dynamic in organizational behavior.

In words he shared on Rich Roll’s podcast, the purist and the pragmatist are at the heart of a valuable tension in businesses, organizations, and movements.

I expect you’ll recognize it.

END_OF_DOCUMENT_TOKEN_TO_BE_REPLACED

The Pittsburgh Steelers are headed to another Super Bowl with Ben Roethlisberger at the quarterback position.  Roethlisberger’s already won two Super Bowl rings with the Steelers.  In those games, he set up wide receivers Hines Ward and Santonio Holmes as Super Bowl MVPs (in 2006 and 2009, respectively). 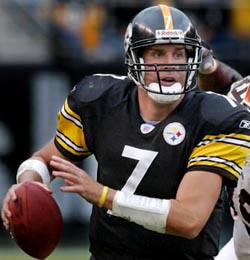 With due respect to defensive standouts Troy Polamalu and James Harrison (and to Polamalu’s insanely distinctive hair) – I suggest that Roethlisberger is today’s face of the Steelers franchise.

Physically large and notably tough compared to others who play his position, “Big Ben” seems a good fit for this role.  The city, the uniforms, the tradition – they all say “tough,” “blue collar,” “hard-nosed.” 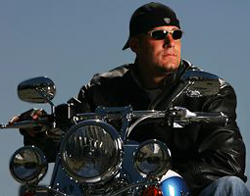 With his penchant for riding (and crashing) motorcycles without a helmet, sporting sleeveless (cut-off) shirts, wearing his ball caps backward and sporting facial hair in various styles and stages of growth, Roethlisberger is Steelers football.  The only NFL locale more fitting for this might be Oakland, but Ben’s a Pennsylvanian who played college ball in Ohio.  He’s far more a Steeler than a Raider. 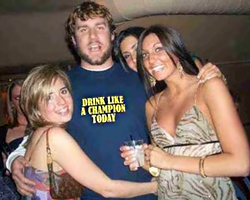 Ben Roethlisberger drags around everywhere he goes the weight of multiple rape allegations.  To be fair, he’s never faced charges due to insufficient evidence.  He has, however, enjoyed a 6-game suspension from the NFL due to this behavior.  Not even a year after he claimed a Lake Tahoe woman’s allegations “false and vicious,” adding that he would “never, ever force (himself) on a woman,” he officially locked down his dirt bag brand in Milledgeville, Georgia.

Fact: this two-time Super Bowl champion, perennial Pro Bowl quarterback and multimillionaire had sex with a 20-year-old girl in a bathroom in a bar in rural Georgia.  Read that again, let it sink in, then proceed to the next line.

This is not a winning play.  In fact, it’s a guaranteed loser.  This time, it resulted in another rape allegation.  He admitted contact, but denied assault.  I hate to add this, but I must … this happened in a bar bathroom, not in a club, not behind a velvet rope, not in a VIP section, not in a private room, not over at a nearby condo or hotel room.  Consensual or not, this is dirt bag behavior.

Witnesses claim that Roethlisberger demanded “all you bitches, take my shots” at the bar (“Wow, thanks for the invite!” and “Will do, Big Ben!”) and that his bodyguards were blocking the bathroom door (“Please move along, nothing to see here.”)  Enjoy this video deposition from his accuser.

All these details aside, guilty or not, fair or unfair media treatment … Roethlisberger’s not in control of a winning brand.

A quick look at Roethlisberger’s Super Bowl champion and Pro Bowl quarterback contemporaries in the AFC shows the difference between a winning personal brand and a losing one.  Peyton Manning of the Indianapolis Colts: generically All-American, son of an NFL legend, best athlete host of Saturday Night Live ever (a nod to the hilarity of Michael Jordan’s obvious discomfort as SNL host), pitchman for all kinds of common things.   Tom Brady of the New England Patriots: GQ cover guy, dated supermodels before marrying one, pitchman for high-end luxury goods and brands.  These Super Bowl MVPs (Manning in 2007 and Brady in both 2002 and 2004) have relatively clear brands.

Though young and not yet as accomplished, there’s AFC championship game competitor Mark Sanchez of the New York Jets: southern Californian and USC grad, third generation Mexican-American and serious playoff competitor with 4 wins in just 2 years … all on the road.

An elder who’s a fair comparison is also a Super Bowl champion, Super Bowl MVP and Pro Bowl quarterback who spent his career in the AFC.  Similar to Roethlisberger in physical size, throwing ability, willingness to take a hit and overall style of play, John Elway of the Denver Broncos: worst thing he was ever involved in was a Ponzi scheme … and he was the victim, serious enthusiasm, big smile, looks kinda like the horse he wore on his helmet.

As I argued a couple months back, when Kevin Garnett of the Boston Celtics refused to own his words, you have to own what you say and own what you do.  These decisions and actions define you.  You can use them to build, develop and enhance your personal brand or you can just let it all happen and deal with the consequences (“Drink Like a Champion Today”).

Having sex with a 20-year-old girl in a bathroom in a bar in rural Georgia  – consensual or not, with your bodyguards blocking the door or not – is always a losing play.

Being an incredible on-field performer buys lots of forgiveness, but it buys no respect.  To me, Big Ben’s brand is “dirt bag.”

Was media treatment of Roethlisberger and the rape allegations fair?

Does off-the-field behavior of NFL players affect your thoughts or feelings about the players or the League in any way?

Have you read Jack McCallum’s Sports Illustrated cover story with the subtitle “An NFL Superstar’s Repulsive Behavior, the Ultimate Expression of Athletic Entitlement Run Amok, Has Forced Even the Most Die-Hard Fans to Question Their Team and Their Football Faith – and Made a Small Town in Georgia Wish He’d Never Paid a Visit” yet?