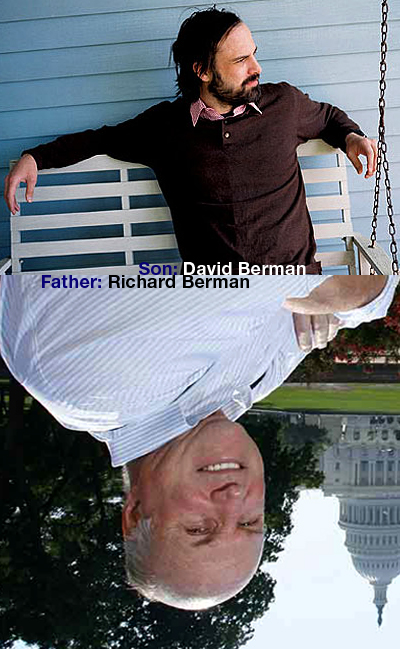 David Berman has served as the driving force behind Silver Jews, a band with which I became familiar through the involvement of Pavement’s Stephen Malkmus.  In generic terms, they play independent pop/rock/folk.  I’m not an especially well-versed or dedicated fan of Silver Jews, however their “American Water” (1998) really resonated with me.  It’s an album to which I continue to listen.

Over a six-album, fourteen-year career, their approach has been literary (poetic at a minimum) and the music hook-laden; I can appreciate the work.

Berman resisted playing live for many, many years.  He unceremoniously ended the project in January, 2009, at which time he gave a few interviews and revealed a rift between himself and his father, Richard Berman.  What I call a rift, you might call something else.  Of his father, he wrote on his record label’s message board:

“My father is a despicable man.  My father is a sort of human molestor.  An exploiter.  A scoundrel.  A world historical motherf*cking son of a b*itch.  (sorry grandma)”

This expression follows a threat to sever their relationship and a 3-years-and-counting estrangement between these Bermans.

What’s the problem with Richard Berman?  In his son’s words:

His clients include everyone from the makers of Agent Orange to the Tanning Salon Owners of America.

Richard’s a lawyer and lobbyist, a “hired gun” and “major tool for corporate America,” according to 60 Minutes.  A nickname he celebrates: “Dr. Evil.”  Because many companies and industries don’t dare fight some fights themselves, they employ an ingenious system he’s devised to create front organizations with innocuous names to “educate” us.

Berman and Company is a PR firm.  How they’re positioned on their home page:

“Berman and Company is a dynamic research, communications, advertising and government affairs firm.  Our mission is to ‘change the debate’ … we don’t just change the debate.  If necessary, we start the debate.”

An over-simplified demonstration of the power of this idea:  the semantic shift from “inheritance” or “estate” tax to “death” tax.  The debate has been changed simply by changing the language.  A “death” tax is now popularly opposed, even by millions who have no expectation whatsoever of an inheritance, an estate, or a tax liability.  I have no particular feelings about such a tax; this simply demonstrates how people can be led to feel and act in others’ interests through language and positioning.  *Berman was in no way involved in the renaming of the estate tax; follow to read a little about the origin of these semantics.*

So:  if public opinion is swaying against your financial interests and the topic is too hot for your company to touch openly, Berman’s built the kind of operation you hire … smart, connected, and clever.  They tend to position any and every form of regulation as evidence that America’s becoming a “Nanny State.”  In doing so, they render regulation unnecessary and insulting.  Their clients line up behind this position to protect or advance their financial interests … or at least to throw up an obfuscating smoke screen.

I’m not a fan of regulation, but often accept it as necessary (ineptitude and lack of enforcement are fundamental problems).  I won’t touch death and taxes.  I won’t touch the ethics of “anything for a dollar,” nor corporations’ inherent inability to hold values, ethical or otherwise.  I won’t touch the “Nanny State” arguments.  Instead, I will return to the fascinating story here – a father and a son divided fundamentally by opposing world views.