America, Not Quite Land of the Free: Great In Spite of Jail

It’s one of Amy Poehler’s top 10 favorite moments from Parks and Recreation.  It’s from the Sister Cities episode (Season 2, Episode 5), in which Fred Armisen leads a Venezuelan delegation visiting its sister city in Pawnee, Indiana.

In this extremely funny scene, Armisen’s character reacts to the relatively outrageous behavior of local townsfolk in a public meeting in a school gym.

“This is outrageous!  Where are the armed men who come in to take the protesters away?” he asks, before running through a list of things for which you’d go “right to jail” in his home country.

The funniest part to me: Venezuela ranks 96th in the world for incarceration rate per capita.

Who holds the top spot by a wide margin?  The land of the free … our United States of America! 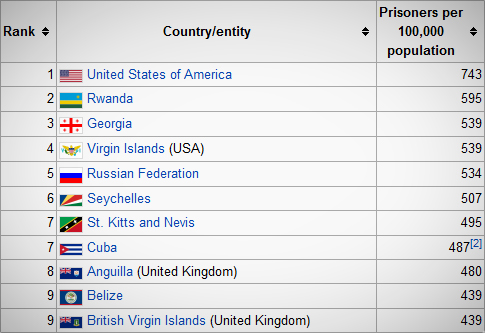 The United States of America, Land of the Free: Great In Spite of Jail

Per Wikipedia (not an academic source, of course, but generally well updated), the US has an incarceration rate 398.7% higher than that of Venezuela  (743 vs 149 prisoners per 100,000 population).

Even the U.S. territories of American Samoa, Puerto Rico, Guam, and the Virgin Islands dominate Venezuela in terms of incarceration rate, ranging from 32.9% to 261.7% higher.

Here are a few other sources: News.BBC.co.uk  |  NationMaster.com  |  PrisonStudies.org

Though they all differ slightly, America is definitely in the top spot.  Exceptional!

The Bottom Line:
Some find it fun to laugh at other people.  Some find it comforting to believe in American Exceptionalism.  It’s important for everyone, though, to keep things in perspective.

A related look: incarceration rates throughout United States history can be seen right here (spoiler: huge spike in the 1980s).

An unrelated “In Case You Didn’t Know” detail: Fred Armisen was the drummer for Chicago’s Trenchmouth in the early 90s.  See “The Volcanic Action of My Soul” open with a solo of his right here.