What I Want in a Purchase

Says what it is.  Does what it says.  Solves your problem.  Exceeds your expectations.  That’s all I want in a purchase – how about you?

I really love to hike and to climb mountains.  I don’t do it as often as I would like, but I appreciate every opportunity I get.

Several times in fall or spring, I’ve been out in conditions in which snowshoes would have been a serious benefit.  I’d casually surveyed the market for several months, never quite serious enough to commit to a purchase.  A friend recommended the MSR Lightning Ascent.

It’s a serious product.  Cut from aerospace-grade aluminum.  Lightest in its class.  Heel lift to support steep climbs.  A “total traction” design with teeth around the entire frame.  In short, it was designed to serve my purpose in an exceptional way.  I also expected to have the shoes for decades, perhaps handing them down to my son should he want them.

I probably would not have dropped the full retail price ($260-300); I wanted them, but did not need them.  I did, however, find a pair at one of the finest little shops in downtown Colorado Springs, Mountain Chalet.  End of season – $105 off.  Um, OK.

Picked them up and took them out the same weekend for a visit to Horsethief Park and a climb to Sentinel Point with Matt Payne (side note: check out 100summits.com – a website he built from pure passion and no web design background to speak of prior to initiating the project).

The MSR Lightning Ascent performed beautifully on hard pack, soft snow, deep powder, ice, steep slopes and all else we encountered.  Though only about 3 miles to Sentinel Point, the elevation gain is about 3,000ft.  Much of that gain is in the last mile and a half.  The heel lift proved to be an extremely valuable feature. 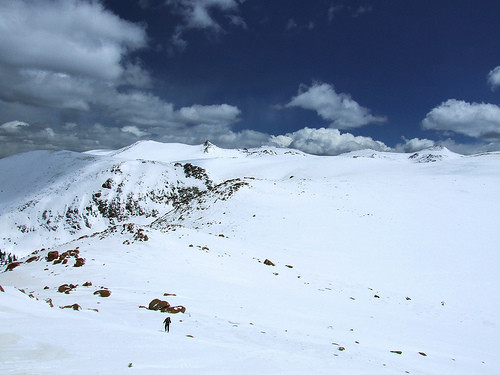 Approaching Sentinel Point on the west side of Pikes Peak

Said what it was.  Did what it said.  Solved my problem.  Exceeded my expectations.  That’s what I got in the purchase.

Worth noting: they have a similar similar design at a lower price point in the Denali Ascent and Denali Evo Ascent.

Here’s a photo set from the hike.